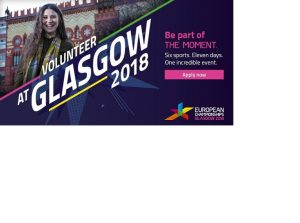 Organisers of the Glasgow 2018 European Championships have been inundated by the public response after an incredible 2,150 people applied to be part of the volunteer team in the first 24 hours of the recruitment campaign.

Glasgow 2018 is aiming to find more than 3,000 volunteers who will be the welcoming face of the European Championships, which takes place 2-12 August 2018, and they are well on their way to surpassing that target. Applications opened at 10am yesterday morning with volunteers set to play an essential role in the experience offered to athletes, officials, media and spectators as they visit Glasgow and Scotland.

As well as attracting 2,150 entries in just 24 hours applications have come from every corner of Scotland and from across the globe including Australia, India, Belarus, Ghana, Italy, Jamaica, Germany and the USA. Applications will remain open up to the public until 31 July 2017 with Glasgow 2018 keen to hear from as many people as possible. A list of criteria and Frequently Asked Questions is available at glasgow2018.com

Volunteers set to play an essential role in the experience offered to athletes, officials, media and spectators as they visit Glasgow and Scotland for the European Championships and will support a wide range of functions from Spectator Services and Accreditation, to Transport and Media and much more.

Glasgow 2018 Championships Director Colin Hartley said: “We are absolutely delighted by the response so far to our call for volunteers but we want as many people as possible to put their name forward. The numbers so far are remarkable but there is still plenty of time to register an interest for the volunteer team. We don’t want people to just watch the European Championships, we want them to be part of it.”

Glasgow 2018 is committed to ensuring that the Volunteer Programme is open to all, building on the success of previous programmes delivered in the city including the Host City Volunteers and the Homeless World Cup. Full support will be given to those wanting to be part of the team regardless of their experience or current circumstances.

This partnership will create a new event on the world stage elevating the status of European Champions and attracting a potential television audience of up to 1.03 billion across the continent, with a wider audience via digital platforms. Attendances across Glasgow 2018 are expected to be in the region of 250,000.

Around 3,000 athletes will travel to Scotland as part of an overall delegation of around 8,500 including officials, media and others. And with a potential television audience of 1.03 billion across Europe set to watch the action, Glasgow will again be in the spotlight with the event being covered by free-to-air broadcasters, including the BBC, across the continent.

The Glasgow 2018 European Championships will build on Glasgow and Scotland’s reputation for hosting world-class sporting events including the 2014 Commonwealth Games and Ryder Cup. Pre-registration for priority access to tickets currently available at glasgow2018.com for a limited time.