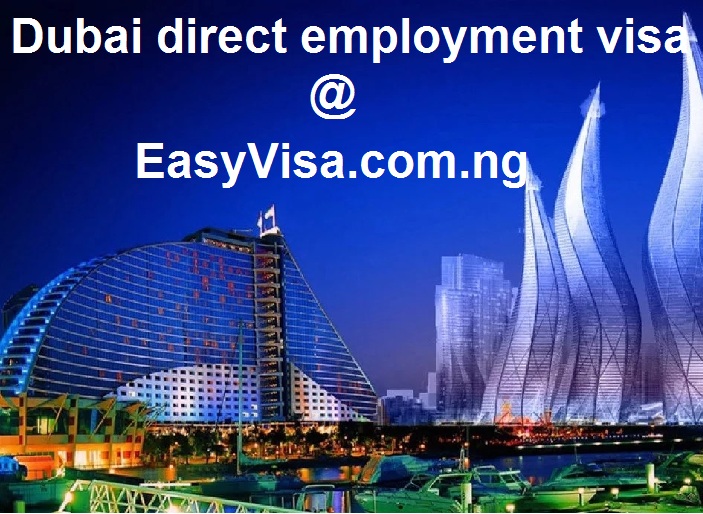 Accommodation feeding and insurance are included in this package

Dubai direct employment visa duration for the processing is 6 weeks with one hundred and fifty thousand (₦150,000) down payment and the remaining balance payment till visa is out but you must prove that the money is ready and that you are willing to travel immediately.

Dubai is the largest and most populous city in the UAE (United Arab Emirates) It is situated on the southeast coast of the Persian Gulf and is the capital of the Emirate of Dubai, one of the seven emirates that make up the country UAE.

Dubai and Abu Dhabi are the only two emirates to have veto power over critical matters of national importance in the country’s Federal Supreme Council. The city of Dubai is located on the emirate’s northern coastline and heads the Dubai-Sharjah-Ajman metropolitan area.

Dubai in couple years has emerged as a global city and business hub of the Middle East. It is now a major transport hub for passengers and cargo all over the world. By the 1960s, Dubai’s economy was based on revenues from trade and, to a smaller extent, oil exploration concessions, but oil was not discovered until 1966. Oil revenue started to flow in 1969.

Dubai’s oil revenue is responsible for the early development of the city, but its reserves are limited and production levels are low: today, less than 5% of the emirate’s revenue comes from oil.

The Emirate’s Western-style model of business drives its economy with the main revenues now coming from tourism, aviation, real estate, and financial services, a big lesson for Nigerian Government.

The city has become iconic for its skyscrapers and high-rise buildings, in particular, the world’s tallest building, the Burj Khalifa. Dubai has been criticized for human rights violations concerning the city’s largely South Asian and Filipino workforce.

Dubai’s property market experienced a major deterioration in 2008–09 following the financial crisis of 2007–08, but the emirate’s economy has made a return to growth, with a projected 2015 budget surplus.

N.B this opportunity is for 10 people only and very is urgent, if you are not ready to travel immediately or if the fund is not readily available don’t apply; So that you won’t waste your time and the initial deposit.

My candid advice is If you don’t have eight hundred thousand Naira (₦800,000) to process Dubai work permits visa, buy my e-book “How to quickly get any Country visa in less than 72 hours” to process any country visa of your choice for yourself, don’t just sit down there doing nothing and waiting for God to intervene without even taking the first step to apply for any visa.